Turkish Thrace is that part of Turkey which lies in Europe, across the Dardanelles and Bosphorus Straits from Anatolia or Asia Minor. The Greeks crossed these straits to fight the Trojans, the Persians to fight the Greeks, the European Crusaders to fight the Saracens in the Holy Land and the Ottoman Turks to carve out their dominions and these are but a few of the most noted passages of multitudes in search of spoils or glory. The region remains named after its ancient inhabitants, the Thracians, who were of a good warrior race often forcibly drafted into the Roman legions or the Macedonian phalanx. In a land that for thousands of years has served as a bridge of passage between two continents it is, however, absurd to speak of the current racial stock with any level of confidence, but in the field of kilims it can be said that they are distinctively different from those of Anatolia. 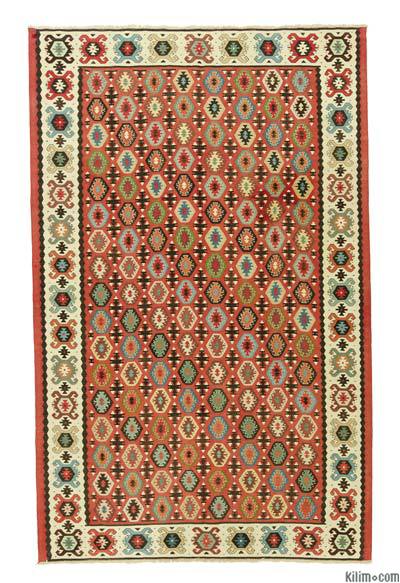 Sharkoy
Sharkoy is a small, undistinguished town on the northern shore of the Sea of Marmara. When applied to kilims, however, Sharkoy is a generic name used for those made in the European part of Turkey, though some may also have come from adjacent Bulgaria. These kilims are generally characterized by lively naturalistic designs, mainly floral, with tree-of-life, bird, and leaf-and-vine motifs. Stylized trees and leaves or birds are also found in Sharkoy designs, sometimes set in prayer arches or in borders, and serrated or diamond-shaped medallions are also sometimes encountered in these designs. Sharkoy kilims usually come in a superior finely woven slitweave with a rich, deep palette of red, blue and green with contrasts in yellow or white. Imaginative color combinations make some Sharkoy kilims outstanding, just the right accessories to put that final touch that completes a stunning room decor.