What is a Kilim?

Kilim, a word of Turkish origin, denotes a pileless rug of many uses produced by one of several flatweaving techniques that have a common or closely related heritage and are practiced in the geographical area that includes parts of Turkey (Anatolia and Thrace), North Africa, the Balkans, the Caucasus, Iran, Afghanistan, Pakistan, Central Asia and China.

Although at times you may find kilim rugs included in the general genre of "oriental rugs", in more accepted practice, kilims are in a class of their own.

The major difference between a kilim area rug and a carpet or a pile rug is that whereas the design visible on a pile rug is made by individual short strands of different color being knotted onto the warps and held together by pressing the wefts tightly, kilim designs are made by interweaving the variously colored wefts and warps, thus creating what is known as a flatweave.

Kilim Woven with the Slitweave Technique

Kilims are generally woven with the slitweave technique. The slit refers to the gap left between two blocks of color. It is created by returning the weft around the last warp in a color area, and the weft of the adjacent color is later returned around the adjacent warp.

Weavers pack the weft tightly to completely cover the warp and often favor diagonal patterns so as to avoid weakening the structure of the rug with vertical slits. It produces bold, sharp patterns that weavers enjoy creating with more freedom allowed than a plainweave. This is also why kilims are so closely associated with geometrical designs even though there are are kilims with floral designs as well.

This is the most common weaving technique used to create geometric and diagonal patterned kilims. The slit refers to the gap left between two blocks of color. It is created by returning the weft around the last warp in a color area, and the weft of the adjacent color is later returned around the adjacent warp. Weavers pack the weft tightly to completely cover the warp and often favor diagonal patterns so as to avoid weakening the structure of the rug with vertical slits. They work on one color block before moving onto the next. It produces bold, sharp patterns that weavers enjoy creating with more freedom allowed than a plainweave. It also results in a smooth kilim that is reversible with the same pattern on both sides in most cases.

Are kilim rugs just floor coverings? No, some are hangings, some are bench or sofa coverings, bags or mule saddles. They are very popular as colorful kilim pillows, as well.

Kilims look great on walls since they are also art pieces! See our page on hanging kilims for examples and options and let us know if you need help.

What does it take to make a kilim?

In material terms, not very much really. A loom, a beating comb, a shuttle (optional) and a knife or scissors are the simple tools needed and wool is the primary material. Cotton, silk and animal hair (goat, camel, or horse) are also sometimes used, mostly in conjunction with wool. Gold or silver thread, beads, and other small decorative baubles that strike the weaver's fancy are also sometimes inserted into the design, but not very often.

The earliest known illustration of a loom appears on an Egyptian bowl dated to ca. 4000BC, but its invention is believed to have been made even earlier, at the dawn of civilization. Today, though looms may vary in type, size and complexity of construction, in most cases they are quite simple structures of wood with, perhaps, a few metal parts.

The function of the loom is to hold the longitudinal strands (known as warps) under tension so that the horizontal strands (called wefts) can be woven between the warps to produce a kilim rug. Custom and circumstances usually determine the type of loom used. Sedentary villagers usually employ a fixed vertical loom while nomads, for the sake of portability, generally employ a horizontal ground loom where stakes driven into the ground hold the loom in position.

Adjustable looms with a fixed width but with a mechanism permitting the completed horizontal kilim section to be moved out of the way of the weaver are usually found in more sophisticated contemporary kilim workshops.

A beating comb is usually just a larger and cruder version of the familiar hair comb; it is usually made of wood, metal, bone, horn, or some combination of these materials. Its function is to compress, i.e. "beat down", succeeding lines of wefts against the preceding ones so that the kilim rug produced is tightly woven.

The shuttle is basically a stick with notches in the ends. When used, the weft end is placed in the notch and the shuttle is then inserted between alternate warps to produce a weave, but weavers often prefer to dispense with the shuttle and pass the weft between the warps by hand.

A knife or scissors are used to cut and trim the wefts and warps.

This popularity of wool is due to its inherent qualities. It is supple, durable, handles easily when spun or woven, readily takes on dyes and, most important, is in plentiful supply in kilim-making regions. There are certain breeds of sheep, like the merino, whose fleece is especially sought-after for its special luster and length of fiber, but actually it's the domestic fat-tailed sheep bred with its favorable climatic and grazing conditions that provides much of the excellent fleece used in kilims.

Cotton is commonly used for warps because of its high strength and plentiful supply. Also, because it keeps its shape well in use, retains its natural whiteness with age, and because it can be spun into fine, thin strands, it is commonly interwoven in places to highlight certain aspects in the overall design executed mainly with wool.

Animal hair - goat, camel or horse - is used sparely in kilim-making, but to good effect. Very strong and durable camel hair, where available, is sometimes used to give added strength to a woolen kilim rug, while tail or mane hair of horses is used by some nomads to provide decorative fringes or tassels. Goat hair was commonly used to weave nomadic tent and floor covers for its strength. Whereas goat hair is rougher that wool, angora goat hair, "mohair", is much softer and gives a silky sheen when mixed with wool. Mohair is also used to make the lustrous "filikli tulu" with its shining locks of hair.

Silk was and remains a luxurious material, and though flatweaves made from silk are now rare they are still produced, notably in the Kayseri district of Anatolia in Turkey. Bridal dowries that include silk flatweaves are treasured, regarded as status symbols, and protected as family wealth.

Beads and baubles, and other items that may be regarded as extraneous to a flatweave readily marketable in Western countries, are sometimes interwoven into a kilim design by some tribal kilim-makers and, due to their very authenticity, such kilims have a certain ethnic appeal.

Motifs are derived from symbols that were used in ages gone by to inform, communicate and to convey ideas. Over time, some of these signs merged with myths, acquired hidden significance and moved into the world of esoteric symbolism. In this context, their use may not be limited to decorative purposes. Due to the hidden forces they are believed to imply, their primary purpose may well be psychological rather than aesthetic. Please see a comprehensive catalogue of motifs and symbols here.

If you’d like to know more about our custom kilim services, please feel free to get in touch by emailing: sales1@kilim.com. You may also visit our new, vintage or antique kilim collections in our website, where you can browse by color, size, and price. Have fun!


Kilims in Museum and Exhibitions

Antique Kilim rugs find their places in numerous museums, galleries and exhibitions.
Here are the most important museums that house kilims: 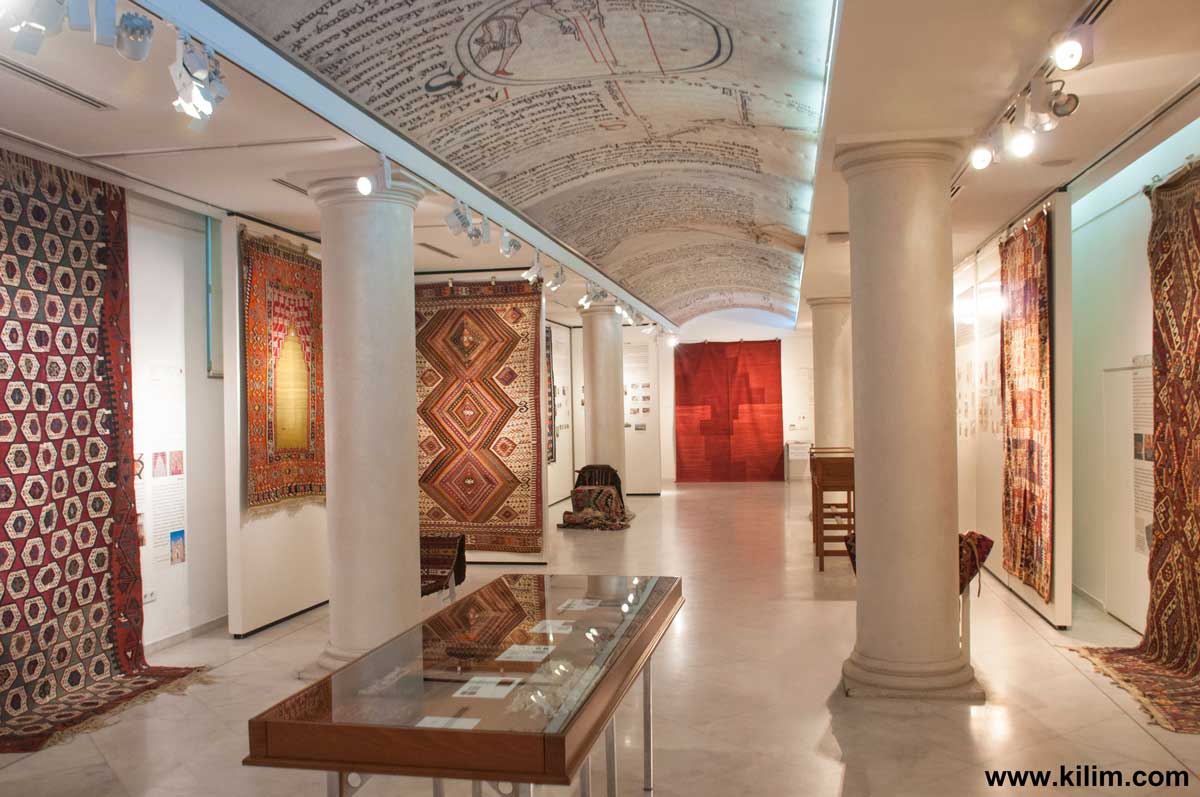 We would like to introduce you to exquisite living environments all designed with kilim area rugs, contemporary area rugs, other authentic wool rugs and more... We hope that you'll find new refreshing ideas to apply for your home in these original interior design samples.

See more about living with rugs

Designing With New and Vintage Rugs

When you purchase a kilim or a hand-knotted pile rug, you are purchasing an item that has the power to completely change the character of a room – whether that means creating a central focus, bringing a space together, or the ‘wow factor’.


Read more about designing with rugs

In recent years, a new trend has been emerging in the rug industry that has seen older rugs being given a make-over to complement the modern home. While the patterns and colors of traditional rugs remain an exquisite insight into regional craftsmanship of Anatolia...

Tulu is the English pronunciation for the Turkish word, "tüylü" meaning hairy. The technique used for weaving is similar to that of the Middle and Western Anatolian carpets. The number of wefts is slightly more than that of the regional carpets and the yarn for tying is spun loose...

When choosing a rug to complete a room, we feel it’s important to go beyond the aesthetics and consider the material it is made of. While rugs made from synthetic fabrics may look similar to wool versions, when you scratch beneath the surface...