The region of Eastern Anatolia borders the Caucasian republics that recently gained independence from the now-defunct Soviet Union; it also abuts Iran, formerly known as Persia. A constant bone of contention between Persia on the one hand and Rome-Byzantium on the other, in more recent times much of this territory was under Czarist Russian occupation from 1877 until 1918 - with the unending consequent suffering and displacement of populations through the ages. The region has experienced, in addition to Turkish, Kurdish, Azeri, Armenian, Russian and Iranian influence to a greater or lesser degree, some of which is evident in the designs and coloring of weavings made here. 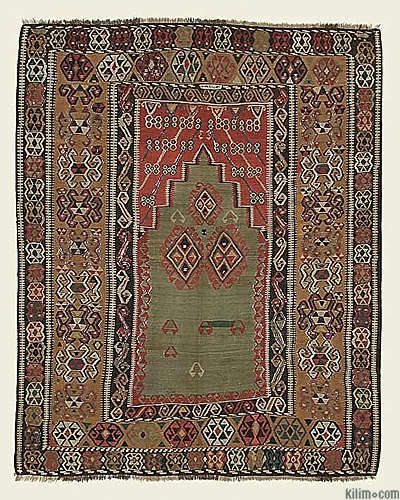 Erzurum
Archaeological excavations have shown that human habitation in this region has existed at least since the Paleolithic Age, and that man practiced animal husbandry as early as ca. 3000 B.C. There are still a very few vestiges left from the fortification walls erected by the order of the Emperor Theodosius II when the city was a Byzantine fortress known as Theodosiopolis, but most extant historical buildings date to the much later era of Turkish sovereignty.
The winter climate here is very severe, with many villages often snowed in for months at a time, so weaving on home looms is a common occupation for women. Erzurum is known for its prayer rugs, generally woven in slitweave and using a somewhat somber palette. Kurdish design elements such as wolf track and wolf mouth symbols are encountered often due to the large Kurdish population active in weaving. The nearby town of Bayburt also produces very attractive kilims, some with Kurdish designs but using a warmer, lighter palette.

Influence of the Caucasus is also quite evident in this region in the form of Turkish Karabag weavings produced here mainly over the past fifty or so years. These bear bold floral designs on dark backgrounds which have been presumably brought here from the region of the same name in Azerbaijan by Azeri Turks forced to leave by locally more numerous and powerful Armenians. 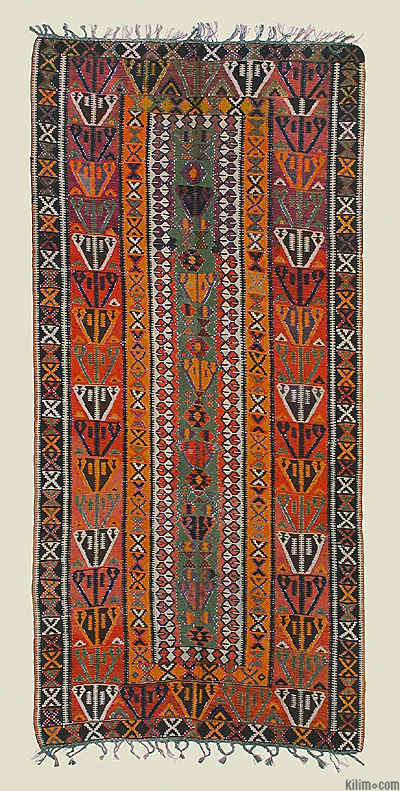 Kars
Kars, a fortress on the marches of empire, subject to sieges and conquest, a land of harsh, long winters, a crossroads of cultures, and one of the earliest human settlement sites of Anatolia known to have been inhabited by man since the Paleolithic Age. The first historically recorded kingdom in this region was that of the Urartu (9th century B.C.), while early Greek writers refer to the inhabitants as ‘Armenoi’, doubtless the forebears of Armenians.

The long history of this land contested by every race and nation in the vicinity is full of anguish and it includes a chapter deeply etched on the Turkish psyche of which the Western public is for the most part totally unaware: In 1915 a whole Turkish army corps froze to death in the mountains of Sarikamis, just southwest of Kars, in an attempt to recover these territories lost to the Russians in 1877. In more recent times, in 1945, the Soviet Union once again laid a claim to the Turkish provinces of Kars, Artvin and Ardahan in the never-ending Russian drive to the warm waters of the Mediterranean.

Perhaps reflecting the suffering of the people in the past, regional kilims have tended to show a dark palette which, however, has lightened considerably since about 1950 when some measure of peace returned. Caucasian influences can be detected in some designs, but the kilims of Kars and nearby Kagizman are often cut up and sewn into fashion articles, such as bags or pillow covers, which are more easily marketable than the oddly sized kilims themselves. Loose slitweave construction and the use of natural brown wool warps are the characteristics by which regional Kars kilims are often distinguished. 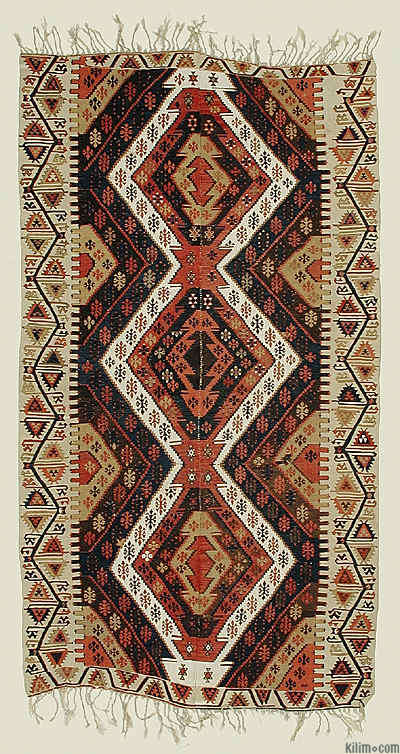 Malatya
Who would associate the Turkish town of Malatya in eastern Anatolia with the Roman legions? Contemplating a Malatya kilim it might be interesting to know that the place was once a Roman legion encampment guarding the eastern marches of the Roman Empire from Persian incursions; given municipal status by the Emperor Trajan it thus became a city named Miletene. Being aware of this, it is fascinating to speculate whether a Roman legionnaire or centurion had once bought his kilim from some local tribe and sent it to wherever his family was living in the far-flung Roman Empire.

The Malatya story certainly does not begin with the Romans; excavations show human habitation since at least the Late Chalcolithic Age, ca. 4000-3500 B.C. It is also known that Assyrians, Armenians, Kurds, Macedonians, Medes, Persians, Byzantines and Arabs have all, at one time or another inhabited this land before the Turkish conquest ca. AD 1100.
Malatya kilims are usually woven in slitweave and plainweave, sometimes with supplementary weft wrapping, using fine wool and some cotton; the palette is dominated by dark hues of brown, red, blue and green, with black and white also used for contrast. Weavings are in many varied sizes but without much diversity in designs, this often attributed to the reputed prevalent influence of one Kurdish tribe, the Rashwan. Smaller kilims often have one central medallion, while larger ones may feature three or four linked medallions; “oversize” kilims are made in two halves and stitched together.
Sinan, a small community near Malatya, is also a kilim production center where good quality weavings are made with designs and coloring characterized usually as Kurdish. 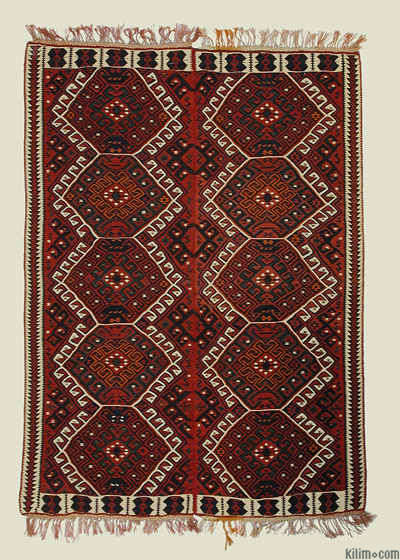 Van
In the mountainous vastness of Eastern Anatolia, very near a lake bearing the same name, the Van is a market town for this area bordering on Iran, ancient Persia. Despite the surrounding rugged terrain which makes travel and communications difficult, artifacts unearthed by archaeologists indicate that there was contact with Mesopotamian civilization ca. 5500-3500 B.C. Later Assyria, then Urartu ruled this land, followed by the same procession of armies that fought over this and other regions of eastern Anatolia, from Medes and Persians to Russians and Turks.

In the meantime the mountaineers and villagers of the valleys, Kurds, Armenians and Turkmen, attempted to live normal lives when not fighting invaders or each other – and all the while their womenfolk were weaving kilims and other textiles.
Van kilims are known for their design compositions consisting of diamond-shaped medallions designated as “hooked” or “crenellated”, repeated down the length of the kilim with the repeated pattern separated by narrow bands. The kilims are usually made in slitweave, in two halves, with narrow slits and narrow borders. There are some design variations with smaller diamonds and plain horizontal bands, but the palette is almost invariably dark, with reds, browns and blues, with contrasts in white.