Finest Authentic Hand-Woven New and Vintage Rugs from The Source
About Us Contact Us Shipping Rates & Taxes Terms & Conditions
Sign In
English
USD
ft. in. lbs

The Central Anatolian region encompasses an extensive high plateau separated by numerous mountain ranges from the Black Sea to the north and by the Taurus mountain range from the Mediterranean regions of the south. While significant northern portions of the Çankiri and Çorum provinces are delineated as belonging to the Black Sea geographical region, their major parts as well as their cultural affinity and historical connections dictate that they be placed in the Central Anatolian region together with Elmadag, Sivrihisar, Kayseri, Kirsehir, Konya and Sivas. Like all of Anatolia, the central region was home to various civilizations and cultures, among them Hittite, Phrygian, Paphlagonian, Galatian and Lycaonian, not to mention Macedonian, Roman, Byzantine and Turkish.

Aksaray
Located in an ancient region where human settlements dating to the Neolithic Age (8000-5500 BC) were excavated, Aksaray province produces kilims with very varied designs likened by some experts to those woven in Konya, so much so that in some classifications a kilim’s provenance may be listed as ‘Konya/Aksaray’. While its proximity to Konya (and Nigde) probably has some bearing on the perceived similarities, a deeper acquaintance with Aksaray’s past may help us to recognize some marks of distinctiveness in its kilims.
The town stands on the site of Garsaura, an ancient settlement which stood at an important intersection of caravan routes in antiquity. Nearby Acemhöyük was an Assyrian colony at the beginning of the 2nd millennium BC and in the 17th century BC the area came under Hittite rule. When invading Phrygians destroyed the Hittite Empire some survivors gathered to establish the late-Hittite Tabal Kingdom in this region, only to be absorbed rather shortly into an expanding Lydia which, in turn, was conquered by the Mede and Persian armies of Cyrus the Great. Near the end of the 4th century BC the area became part of the Cappadocian Kingdom and came under Roman rule in AD 17, later passing into Byzantine possession.

Byzantine religious conflicts, especially the iconoclast persecutions, drove thousands of dissenters to take refuge in the “fairy chimney” caves of Cappadocia previously inhabited by anchorites, and here they built whole underground cities and cave churches richly decorated with frescoes. It seems inconceivable that part of this artistic tradition was not somehow transmitted to the incoming Turkish tribes that poured into Anatolia under Seljuk leadership and began to settle here ca. AD 1076. The Seljuks were generally tolerant of other religions, and although representation of the human figure was forbidden under Islam stylized floral and animal motifs were common in Seljuk art.

Aksaray gets its name from a palace of white marble built here by the Seljuk sultan Kilic Arslan II, now long gone, but it seems reasonable that Aksaray kilims should bear the traces not only of Seljuk heritage but also of the preceding civilizations that had flourished in this region. It is also interesting to note that there are striking design similarities between some Aksaray kilims and those woven by the Qashqai, a Turkic tribe that stayed in Iran when others continued in their westward migration that ended in Anatolia in the 11th century.

Cankiri (Corum)
Çankiri, under its former historical name of Gangra, was once the capital city of Paphlagonia. After many vicissitudes of foreign invasions and changes of control, ca. 1082 the town was taken by a Turkmen clan under the Emir Karatekin and, with brief interruptions of Byzantine and Mongol rule, it has remained in Turkish hands. The magnetic attraction of large cities has caused a loss of population in recent years, with the consequence that traditional kilim weaving has virtually disappeared. Fine wool and soft Angora goat hair are still produced, but not in large amounts, and nearly all kilims from this area offered for sale are quite old.
Çorum continues to produce some kilims, many of which are long runners, some woven in two sections and sewn together to achieve greater width. Both Çorum and Çankiri produce slitweave in bright red, blue, green, yellow, brown and black colors. The designs are in compartmented form with small filler motifs.

Elmadag
Elmadag, meaning ‘Apple Mountain’, is the name of a mountain and a town in its close proximity, both located a short distance east by southeast from the capital of Turkey, Ankara. It has no distinguished history of its own but has recently gained some importance due to the establishment of a State-run machinery production complex. As its name implies, it is known for growing apples, but it also produces good quality kilims in various sizes woven in fine slitweave with medium to fine wool, sometimes also using cotton for effect. Prayer rug designs feature a small arch and crenellated diamond motifs. The Elmadag palette is generally on the somber side using reds, blues, greens, apricot and black, with white cotton highlights.

Kayseri
The name Kayseri strongly evokes its ancient Classical form, Caesarea, but even that is not the name by which the city enters history. Under its first known name of Mazaca it was the capital city of Cappadocia, but vestiges of nearby human habitation found by archaeologists show that an Assyrian trading colony prospered at Kultepe, a few kilometers NNE of the city, both places overlooked by the majestic peak of Mount Argaeus, an ancient name that once again echoes in today’s Mt. Erciyes. The Kayseri area was and still is known for its excellent rugs, both carpets and kilims. The small town of Bünyan is particularly well known for its products. Of special interest are kilims woven with silk since this is the only region of Anatolia to produce these items. Traditional regional kilims are woven in slitweave, often in compartmentalized sections that repeat a common design using different colors, which in turn tend to be subdued, though more contrasting and vibrant hues are encountered in recent workshop-produced items. Some very fine quality rugs in both silk and wool do come on the market and are eagerly sought by connoisseurs. 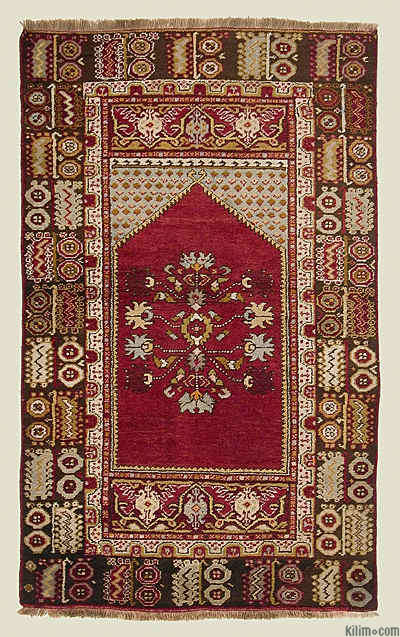 Kirsehir / Nevsehir
Situated in the NW of ancient Cappadocia, and in the Late Roman Era known as Mocissus Justinianopolis, Kirsehir’s past reaches back into prehistory according to testimony of artifacts from the Early Bronze Age. Phrygians, Medes and Persians ruled the region at various times and it suffered ravages during the Arab invasions of the 7th and 8th centuries A.D.
Nevsehir, just SE of Kirsehir, lies close by an ancient Cappadocian settlement of Nyssa, and artifacts indicate human habitation in the Neolithic Age, ca. 8000 B.C. The area’s contemporary fame, however, is due to its moonscape-like geological structure of so-called “fairy chimneys” and subterranean human habitats.
Though not much is woven in these regions today, prayer and throw rugs made here in earlier years are famous and items made in the 19th century are highly prized. Let us note here that in the villages around both Kirsehir and Nevsehir there are still looms in homes which turn out some very attractive kilims. Like in neighboring Kayseri, they are usually made in slitweave with rather similar designs and coloring. 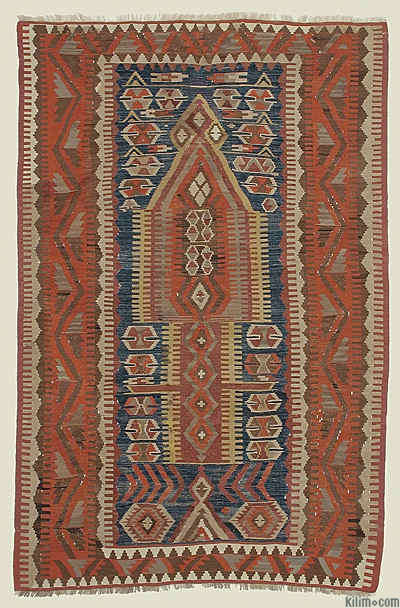 Konya
Konya, or ancient Iconium, was the first capital city of the Seljuk Turks in Anatolia, though the city’s origins predate Seljuk rule by several millennia – the city is mentioned by Xenophon as a frontier town of the satrapy of Greater Phrygia. Archaeological excavations in the area, at Çatalhöyük, testify to organized social life in the Neolithic Age, while artifacts found in other locations are dated to the Chalcolithic and Early Bronze Ages. The Hittite Empire ruled here, to be replaced later by Phrygians, Persians, Macedonians, Romans, Byzantines and lastly the Turks. The “far-as-the-eye-can-see” Konya Plains are Turkey’s breadbasket where millions of tons of wheat, rye, oats, sugar beets, chick peas and onions are harvested each year. With its many beautiful old mosques Konya also has great religious importance for Moslems, and particularly as the burial place of the renowned mystic Mevlana who established the religious order of the Whirling Dervishes. There are a number of important kilim producing centers in the region of Konya, among them Çumra, Eregli, Karapinar, Obruk and Keçimuhsine. Aksaray, which abuts the Konya district in the northeast, may also be conveniently included in the Konya kilim region.
Kilims in this region are generally woven in slitweave or plainweave, there are also some lovely jijims made here, kilims come in many sizes and shapes, and their color palette is all-embracing. These ascertained particulars have led some authorities to say that the Konya region kilims offer the greatest variety in the range of designs and color combinations of all Turkish weaving groups, and just a look at a selection of sample kilims from this region will confirm that this observation has merit.
It is not difficult at all to surmise that the reason for this diversity lies in the central geographic location of the region, a caravan crossroads since antiquity. Obruk, for example, was in fact a major caravanserai where very fine prayer rugs for sale to pilgrims on their way to Konya were woven, and due to this pilgrim traffic these Obruk rugs have achieved world-wide renown. Both Obruk and Keçimuhsine are known for jijims, with the particular distinction that the latter are quite unique of design which features a tree shape. Karapinar kilims are prized for their finely detailed yet simple designs known as saf, meaning pure, plain, without guile. Although Çumra is no longer a kilim weaving center, some excellent examples of Çumra kilims can still be found on the market, coming mostly from bridal trousseaux now offered for sale.

The very variety of Konya region kilims precludes a fair description in limited space, so interested parties will have to devote time to research of specific items when needed. 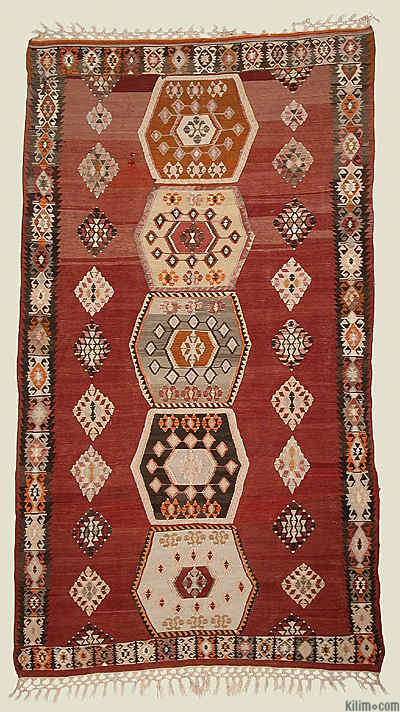 Sivas
Located on the NE boundary of the region of Central Anatolia, Sivas was known under the name Sebastopolis or Sebastea in Classical antiquity. Standing on the banks of the River Halys of history, today’s Kizilirmak, Sivas guards the heart of Anatolia from threats from the east and northeast, the invasion routes which Persian and later Russian armies followed. This mountainous region has always been known for its sheep and the great breed of dogs, the Kangal, raised to guard the flocks and prized worldwide for their fiercely protective yet gentle character. And where there’s sheep, there’s wool and there is weaving.
Situated on trade and invasion routes, Sivas has a mixed population, predominantly Turkish and Kurdish, which keeps fluctuating due to migrations in search of a better life in big cities and abroad. Despite these changes, influence attributable to the principal ethnic groups can be readily seen by the discerning eye in regional kilim designs and coloring. Produced in slitweave and plainweave with supplementary weft wrapping, Sivas kilims are of good quality and are finely woven, they feature central medallions or repeated compartmented geometric designs and relatively soft, pastel hues. Sometimes kilims woven in nearby Sarkisla are attributed to Sivas, but, although both places use very similar designs, the former can usually be differentiated by their looser, coarser slitweave.

As a business and a community, we strive to do our part to slow the spread of the COVID-19 virus while we are in operation. In order to ensure the protection of our employees, we follow the most strict guidelines including using masks, frequent handwashing, sterilizing our equipment and maximizing distancing within our warehouse.

Our customer service team is working from home and will still be available to answer questions in a timely manner. All inquiries can be submitted to us at sales1@kilim.com.

Shipping times may be extended by 2-3 business days. We appreciate your business and your understanding during this time.