The region of Southeastern Anatolia may also be called Upper Mesopotamia as it is watered by the upper reaches of both the Tigris and the Euphrates rivers and was undoubtedly under heavy Sumerian influence, perhaps even direct rule. The area embodies enormous historical heritage of importance to Judaism, Christianity and Islam because this is where Abraham, the prophet venerated by all three religions, is believed to have lived nearly 4000 years ago before migrating to Canaan. Sumerian antecedents of biblical stories testify to that ancient connection. Signs of Chaldean Christian, Armenian and Arab influence on architecture can be detected in this land contested for ages. Today the region has a large Kurdish population subdivided into numerous clans, many still socially organized along feudal lines and kilims have been woven by many. Regional kilim designs and motifs, however, have their origins buried deep in the amalgamated heritage emanating from all the civilizations and cultures of the region’s past inhabitants, and it is simply incorrect to ascribe them only to the present denizens.

Gaziantep
Known previously as Antep or Aintab, Gaziantep was given the honorific title “gazi” (loosely translated as “veteran of war for the faith”) by the Turkish parliament following its stubborn defense (1919-1921) against French and auxiliary Armenian forces in the Turkish War of Independence.
The Gaziantep region has a documented past in excess of 6000 years. It is not known who first built a bastion where the Gaziantep fortress stands today, but it is known that the original was enlarged and strengthened by the Byzantine Emperor Justinian and much later by the Ottoman Sultan Suleyman the Magnificent.
Gaziantep is justly proud of the superb remains of the oldest known school of sculpture in the world, already producing works of art when conquered by the Hittites ca. 1375 BC. The magnificent mosaics and sculptures of Zeugma, made famous by the recent internationally supported efforts to save them from the rising waters of a new dam built on the Euphrates River, further attest to the region’s past artistic accomplishments.
Although still in the realm of plausibility rather than fact, it seems probable that Gaziantep stands on or near the site of an Imperial Roman city called Doliche, but the ravages of man and time have left too few vestiges of that era to verify this thesis.
A region with such an ancient, diversified history enriched by the cultures of a motley procession of inhabitants produced some lovely kilims in the past and some periodically surface on the market. They are usually in slitweave, often made in two halves. The colors used are medium to dark reds, blues, greens and browns, with white cotton contrasts. Six-pointed star motifs, frequently with yin-yang symbols inside the stars, are featured in horizontal bands which constitute the kilim. The wool is usually finely spun, so Gaziantep kilims are sought after for their quality and rarity since none are known to be currently produced. 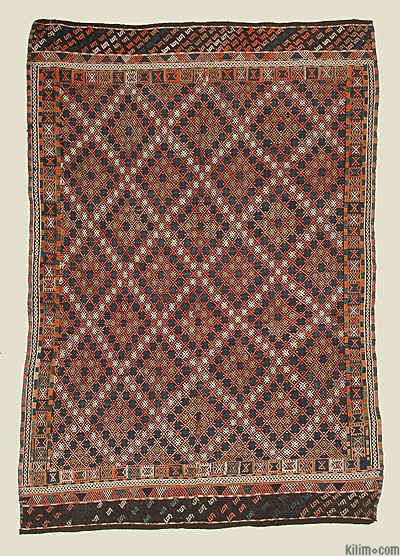 Marash (Kahramanmarash)
The documented ancestry of this city is ancient indeed since it goes back to the records of the Assyrians who call it by its pre-1973 name of Marash. The addition of the honorific prefix “kahraman”, meaning “heroic”, was made in the emotionally patriotic times that followed a military intervention into the civil affairs of the country, undoubtedly meant to accentuate the devotion of Marash citizens to the cause of national unity during the Turkish War of Independence.
Some two thousand years ago the city, then named Caesarea Germanicia, began to mint its imperial coins ca. A.D. 38. It was part of Commagene, a kingdom that had come under Roman rule. A millennium later it was seized by the Norman princes Bohemond and Tancred, two of the leaders of the First Crusade, to be added to their conquest of the County of Edessa, today’s Urfa. Marash was also an important stopping place on the fabulous Silk Road that linked the West to China. This variegated heritage is reflected in many overt and covert ways in the culture of Marash, and although geographic and climatologic classifications include Marash in the Mediterranean region, its kilim associations are somewhat closer to those of Southeastern Anatolia.
Throughout Turkey Marash is primarily renowned for its thick, tasty ice cream, but the region is also known for its highly regarded kilims produced for the general market. These are made mostly in workshops, mainly using the slitweave method with designs geared to accommodate the interior decoration preferences of urban and foreign buyers.