This region by the Aegean Sea is arguably most familiar to Western audiences because it encompasses the lands of Troy, made famous by the Brad Pitt film. To students of history it’s a land renowned for its superb achievements in arts and architecture, not exclusively but particularly during the period of Ionian Renaissance. Rich and strategically placed, the Aegean region was frequently subject of invasions, which often brought depredations and destruction, but its climate, natural beauty and the talents of its population also often brought out the best in rulers and artists to give us some of the most enthralling monuments to human genius, among them two of the Seven Wonders of the Ancient World.

Afyon
Kilims of the Afyon region are generally distinguished by finger-like protrusions that extend outwards from medallions or from other geometric shapes employed in the designs. The name of this characteristic motif is parmakli which comes from the Turkish word parmak, or finger, so the design can be translated as “with fingers”. Parmakli, however, also suggests parmaklik, or fence, and in some Afyon designs there are so many of these protrusions that they do seem to evoke fences rather than fingers. Or, perhaps, they may symbolize the high mountain ranges rising like barriers on the borders of the region.
Its full name of Afyonkarahisar commonly shortened to Afyon, the city and its province are located in the West of central Anatolia where archaeological finds show human habitation at least as early as the Chalcolithic Age and Hittites rule beginning ca. 1800 BC. The construction of the castle that dominates the town is attributed to the Hittite King Mursilis (ca. 1350 BC). Before the arrival of Turkmen tribes ca. AD 1070 Phrygians, Lydians, Persians, Gauls (or Galatians), Pergamenes, Romans and Byzantines ruled here and Afyon was variously known as Acroenos, Acronion, Nicopolis and Opion. Phrygian culture flowered here between the 8th and 7th centuries BC and it was in the nearby former Phrygian capital of Gordion that textile fragments from that era were found. Amongst these were scraps of the earliest known plainweaves and slitweaves, some with simple geometric designs, which may possibly have been the forerunners of today’s kilims. At the very least it shows that the basic techniques of kilim-making were already practiced in that era.
Contemporary Afyon kilims are made in plainweave or slitweave, and the primary colors employed are apricot, pink, blue, green and yellow. The hues are mainly light, but some new village kilims tend to be garish unless faded in the sun. Wool and mohair are produced in the region and the wool used for kilims is of medium and fine quality. 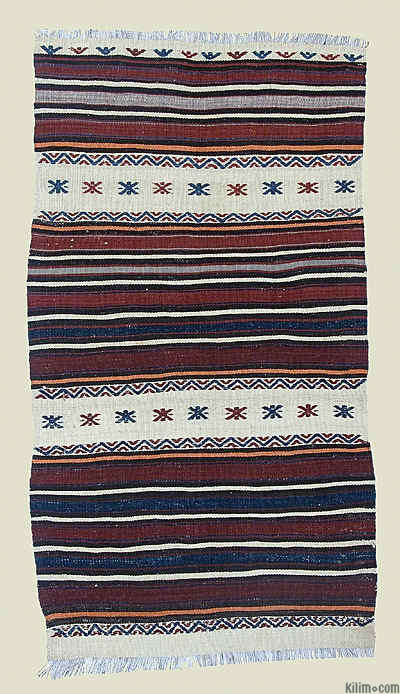 Bergama
The town’s name, Bergama, is an echo of its illustrious former incarnation as Pergamum, an ancient city and kingdom of that name that once ruled much of western Anatolia, even including the Mediterranean port of Antalya. The last king of Pergamum, Attalus III, bequeathed his kingdom to Rome in 133 B.C.
Contemporary Bergama stands on and by the ruins of that famous city, inheriting all the cultural accretions from its past. Today the town is well known in Turkey for the resistance its inhabitants have mounted against a gold mining concession granted to a foreign firm because of its use of poisonous mercury in the metal separation process.
Traditional Bergama kilims, which are still woven individually and in workshops, often bear the “hand of Fatima” motif which reportedly signifies fertility. Other common designs feature a square symbolic of a hope-chest which signifies the wish of the weaver to marry. Plainweave, slitweave and supplementary weft wrapping are the primary weaving methods, while the materials used are medium or fine wool in colors of red, blue, green and some yellow. Zili and cicim weaving techniques are also quite widely used in the Bergama region.

Denizli
One of the fascinating aspects of Denizli and its immediate region is its connection with the manufacture of textiles, continuous since antiquity. Today’s Denizli stands in close proximity to the sites of three famous ancient cities, Laodiceia, Colossae and Hierapolis, all located on land well irrigated by the River Lycus, as it was called in the Classical Era, a tributary of the great Meander, known today as Menderes.
“Among the products of Laodiceia one is outstanding – her wool. This was reckoned softer even than that of Miletus, and was remarkable for its raven-black colour, attributed by Vitruvius to the water which the sheep drank.” (1).
Today Denizli and the nearby town of Buldan are well known for various textile products, including kilims, often still manufactured on hand-and-foot-operated family looms located in private homes. This type of individual production still perpetuates some of the traditional symbolism of design and detail, while workshop-produced items, generally for export, are known to stress qualities desired by the market.
Denizli kilims are usually made in slitweave and their designs, especially in larger kilims, feature serrated central medallions and a bright, vibrant palette.

Manisa
Manisa was known in antiquity as Magnesia ad Sipylum (Magnesia by the Sipylus river). This ancient but not very significant Lydian city was a neighbor of the Lydian capital of Sardis; it is sometimes mentioned as almost a periphery of the port of Smyrna and its name pops up at times in the litany of cities falling prey to various conquerors or resisting sieges in the countless wars fought over this tempting corner of the Aegean littoral.
Today Manisa is almost a suburb of the sprawling metropolis of Izmir and is not particularly known for contemporary kilim production, but some old items with notable abrash work do periodically come on the market.

Usak (Ushak)
In Turkish the name Usak means ‘valet’, ‘servant’ or a ‘hail-fellow-well-met’, a term of joshing but respectful endearment between men. The town of Usak is not associated with any noted ancient site, though we do know that a town named Grimenothyrae, later changed to Trajanopolis, stood here in antiquity and struck its own coins in the reign of the Roman Emperor Domitian.
Not weighted down by ancient heritage, Usak still remains quite a traditional Turkish Anatolian town, so we could surmise that its kilim designs are apt to carry on motifs and symbols brought by the nomadic Turkish clans that came to Anatolia early in the last millennium. The town and the region are, however, also in the process of transition, which is quite evident in the manufacture of kilims where both individual “cottage industry” and industrial workshop production methods coexist. The latter is geared almost exclusively for export with colors usually toned down by fading in the summer sun to suit the Western buyer while products of the family loom, destined for personal use or limited retail trade, tend to a brighter, more vibrant palette. Sizes vary from medium to very large, with the square being a common shape; red ground is common, with blue, green mauve, black, yellow and white used in designs which generally have a large central medallion and decorated borders.
It must be noted that Usak workshop kilims produced for the commercial and export market are often undistinguishable from commercial workshop kilims of Denizli and nearby Esme.

As a business and a community, we strive to do our part to slow the spread of the COVID-19 virus while we are in operation. In order to ensure the protection of our employees, we follow the most strict guidelines including using masks, frequent handwashing, sterilizing our equipment and maximizing distancing within our warehouse.

Our customer service team is working from home and will still be available to answer questions in a timely manner. All inquiries can be submitted to us at sales1@kilim.com.

Shipping times may be extended by 2-3 business days. We appreciate your business and your understanding during this time.